Company is excavating limestone and processing it to aggregates, chalk and stone blocks, which can be used by masonry businesses.
Location of the quarry is in close proximity to main infrastructural projects (all closer than 50km).
Company is active and operates according to concession valid until 31’st of December 2028. In addition, for the entire area was prepared spatial development plan of the city and the village.
Companie's legal structure is civil partnership and it belongs to 3 persons:
First owns 70% of shares
Second owns 15% of shares
Third owns 15% of shares
Dynamic development of the road infrastructure caused a 4-fold increase in turnover in 2011 compared to the initial year of operation 2009, results enabled further growth of the company and started the project to set up production of chalk and technical powder.

Możliwości rozwoju:
Condition of the mining industry producing aggregates depends on the size of the state budget allocated to infrastructure investments. European Union approved 300 billion EURO funds for infrastructure investment in the coming years and it will result in a significant increase in demand for construction materials including aggregates, grits, limestone technical powder. Currently in our region starting up new road construction projects and due to continued cooperation with large companies that perform these investments, we can ensure further contracts for our products.
In addition, diversification of the product portfolio by launching a production line for fodder chalk and limestone technical powder has enabled development of the company in that direction.
Fodder market is growing since 2009 without interruption. In Poland there are about 216 companies producing animal feed. Since 2009 there is a steady growth of several percent of fodder production, ie. in 2009 production reached 7.25 million. tons, and in 2013 increased to 8.45 million tonnes. While the increase in the fodder production for cattle was approximately 4% than increase of the fodder production for poultry jotting annual growth of around 8%. This was due to the increase in poultry production (7-8% increase in poultry meat production and 5-6% increase in egg production).
The production capacity of chalk production line is at the level of 8000 t / month.
Biggest potential of the market in which the company operates is hidden in:
Medium-sized or small companies that produce a large number of customers which translates to stability and security of our sales.
Sales to large companies according to well-defined contracts.
Running profitable supply of limestone technical powder to industrial customers,


Nieruchomości i urządzenia:
The facility includes:
• Excavation covering about 7 hectares and includes 1 500 000 tons of rock,
• The possibility of extending the excavation of a further 1 000 000 tonnes in the areas adjacent to the borders of ownership,
• Auxiliary areas adjacent to excavation covering 2,8ha area within the property,
• Own 630KVA transformer station
• The building of fuel station with an oil’s store,
• Workshop of mechanical and electrical repair
• Office, cloakroom and social facilities
• Chalk production hall with an area of 650m2, along with the production line with a capacity of 12-15t/h able to provide chalk in three different grades. The silos capable of storing approximately 420T chalk in bulk,
• Dryer supplied by the LPG installation (no risk of contamination by dioxins to chalk and technical powder).
• Sorting and crushing installation able to produce 100t / h aggregate in 4 different fractions based on the screener from Łęczyckie Zakłady Górnicze SA, belt conveyors driven by geared motors from NORD built in 2009. It is connected to the impact crusher manufactured by company HAZEMAG.
• Installation of flushing capable of producing 80t / h aggregates in three different fractions of the piled material (at about 200 000t - Excavated material not necessary to evacuate the mining fee), as well as from current production,
• The combination of crushing screening plant for dry material with flushing sieve installation allows for optimal use of the resources of the ledge including off-balance sheet resources,
• 3 crawler excavators from VOLVO: 2 with bucket and one with hydraulic hammer,
• Hydraulic hammer ATLAS COPCO HB4700 delivered new in 2011,
• Hydraulic hammer GB 500E delivered new in 2009,
• Vibrating Ripper delivered new in 2013
• 2 wheel loaders with buckets size: 5m3 and 3m3
• VOLVO dumper truck,
• Forklift 4t from 2006, 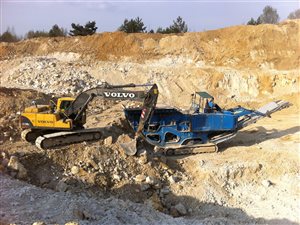